Salwa Siniora Baassiri, currently the director general of the Rafic Hariri Foundation, is a graduate of economics at the American University of Beirut. She has started her career as a researcher in econometrics. she then she ventured in several other domains which empowered her with multi-dimensional capabilities and equipped her to assume key responsibilities in the domains of education, science, culture and communication, also in the realms of cultural and religious dialogue as well as in bioethics. 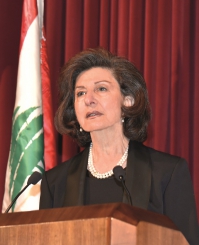