“Syria at War: Five Years On”

Syria, the war-shattered country, had been the main concern and interest of international organizations and researchers since the beginning of the conflict in 2011. Numerous reports were dedicated to the understanding of the crisis and its ongoing implications, which would manifest in the short and long run.

The latest United Nations Economic and Social Commission for Western Asia (UN-ESCWA) report entitled “Syria at War: Five Years On” is a joint research initiative between ESCWA and University of St. Andrews. The Department of Economics at AKSOB invited ESCWA to launch the report and organized the event. Due to travel restrictions, the chair, Dr. Ghassan Dibeh, was replaced by the associate chair, Dr. Walid Marrouch, as moderator of the event.

Present as main speaker was one of the lead authors, Chief of the ESCWA Economic Development and Poverty Section and AKSOB Instructor of Economics Khalid Abu-Ismail.  Also taking part, as discussant, was one of the important contributors of the report, ESCWA Macroeconomic Team Coordinator Ahmad Shikh Ebid. The audience included AKSOB faculty members, Interim Dean Said Ladki, undergraduate and graduate students, as well as invitees from ESCWA and other international organizations. 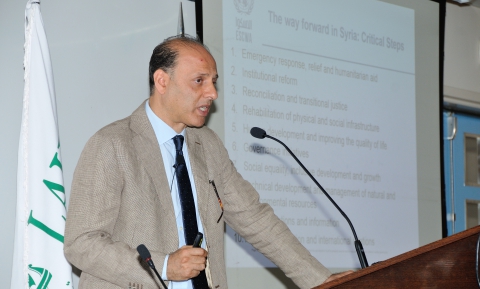 Along with Abu-Ismail, the lead authors are Omar Imady, Aljaz Kuncic and Osama Nojoum. Their research aims at exposing the socioeconomic ramifications of the five-year conflict and the effects of the unilateral economic measures imposed on the Syrian people. The report also puts the refugee crisis into perspective, with regards to the European Union’s humanitarian cooperation and the flow of refugees and migrants to neighboring countries and Europe (Syria at War: Five Years On, 2016). “It’s a crisis that is very devastating. It isn’t like any other crisis that has ever happened in other countries,” as acknowledged by Abu-Ismail, clarifying that the intent behind this broad report was to “try to get Syrians to think ahead on what’s next.”

Centered on the socioeconomic ramifications of the conflict, Europe and the future of Syrians, the report, second under ESCWA National Agenda for the Future of Syria, is organized around four principal and orderly sections – pertaining to the possible events that have led to the 2011, the present situation in Syria, the procedures that may be taken by the international community and last, the guidelines for a post-conflict Syria.

The sources used for the data collected include partner agencies, international organizations, NGOs, in addition to governmental institutions and a large number of Syrian experts who are consultants for the National Agenda. Abu-Ismail also mentioned that they utilized estimates gathered online by LAU economics student Ahmed Mohamed for his paper regarding the ISIS economy. The student’s paper was part of the requirements of ECO863 “Challenges of Economic Development in the Middle East”, taught by Abu-Ismail and Kuncic. 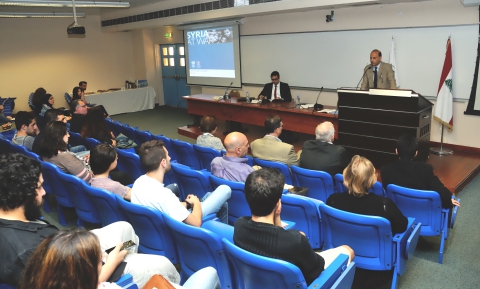 Concerning the first question the authors aimed to answer – How did we get to the 2011 situation? – Abu-Ismail explained that, referring back to the social and economic circumstances of Syria before 2011, no predictors were present to explain the outburst.  “The economic situation would definitely not lead to this situation.” However, explanations related to politics and governance would be plausible. “We have to look into history,” he suggested, as he explained how the Syrian regime could have played a role, adding the external factor, which would be part of the geopolitical struggle. “It’s a controversial issue, not everybody agrees on it.”

Subsequently, Abu-Ismail presented findings that reflected the current state in Syria, showing the amount of economic losses and the tragic social condition. Five years of conflict resulted in an estimated 2.3 million people killed or wounded, more than 12 million displaced and more than 80 percent of the population under the poverty line (Syria at War: Five Years On, 2016).
The country’s main sources of production have been affected tremendously – The report noted a substantial decrease in export and import, GDP and an estimated 95 percent reduction in national oil and non-oil revenues, as opposed to an increase in national debt.
Health and education were also deeply affected social aspects, as Abu-Ismail implied. “Education was doing very well before,” conversely, the Syrians are presently in need for the basic life necessities. 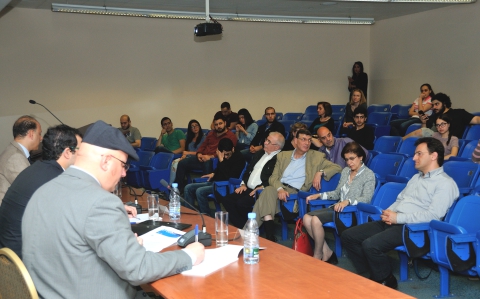 With regards to what the international community can do, the report suggests the importance of the European Union’s support to Syria – by providing more humanitarian aid, given the measures imposed by the U.S. and Europe – and to the refugee communities in neighboring countries.  “If you look at the few pharmaceutical factories in Syria, it’s impossible for them to do their job, and if you want to do humanitarian actions, you have to get money for it and go through. “Given the requirement for US permission when dealing with Syrians, Abu-Ismail advocated the UN and its representatives’ role in transferring the needs and goods without a license. “This should be the common sense,” he said.

Refugees are also the international community’s responsibility. “50 percent of the Syrian population has moved whether internally or externally,” as he declared. Despite the Europeans’ concerns, the report shows how EU countries will eventually benefit from the effective labor market and social integration of refugees, as well as from coordinating with each other to improve the latter’s conditions.

Concluding the report is the section proposing guidelines for a post-conflict Syria. Abu-Ismail revealed the recommended steps for the Syrians themselves – seven guiding principles including the concept of indivisibility, prioritization and organization, the return of Syrians to Syria, rational policy making, safety and security, and gradual improvement.

Time was given for questions, as the audience had several inquiries relating to the report and to the Syrian situation in general.

Syria at War: Five Years On (2016). Retrieved from: https://www.unescwa.org/publications/syria-war-five-years 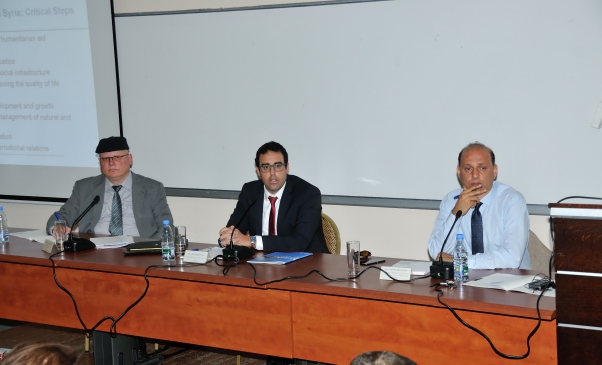