Serving the Community through Research

In the United States and other western countries, the ideal standard of Advanced Life Support (ALS) response times is to arrive to 90 percent of high-priority medical cases within eight minutes of the emergency call (Sa’adah, 2004). This target has been questioned by many authors, as the emergency nature and the specificity of the medical case play an important role in determining the relative and appropriate benchmark.

In Lebanon, with hindering factors such as road congestion and the availability of hospitals throughout the regions, it is essential to identify reasonable target response times for the Lebanese Red Cross (LRC) Emergency Medical Services—the transport and treatment of cases in life-threatening health situations (What is EMS, 2011)—and to formulate strategies to optimize their efficiency, taking into consideration the type of emergencies they face.

The now two-year-old joint research project between LAU and LRC, an initiative by Jordan Srour, assistant professor of operations management, and Abbas Tarhini, assistant professor of information technology, has focused on converting raw data into usable information.
“Every quarter, LRC gives me raw data from their new dispatch system. Once I get the data, I clean it, process it and extract information from it,” said Srour.

the research team, Srour and Tarhini, created a dashboard that highlighted important facets within the collected data. The first facet shows the ambulance response times—every record in the data is a call that an the ambulance served starting with the scheduled mission, the departure from station and arrival to the case, the departure from the case and arrival to the hospital, and the cleaning and return of the ambulance to the station. The dashboard allows the user to view the mean response times organized by the user’s selection of month, quarter, day/night, day of the week, time of day, and/or station number.
The second facet of the dashboard allows the user to see where data collection errors may be arising. As the data-driven dispatch system is new to LRC, using the data to identify potential technological improvements is critical for the success of the system.

“You can tell a lot about what’s happening in the world from looking at the data,” as Srour stated. “All the factors that may affect the response time are all shown there.”

One of the differences she could see was that the travel time was shorter during the night, and this was clearly due to traffic congestion during the day. However, she noted that at night, the time spent on scene was longer than during the day. “At night they get to the patients quickly, but they spend more time with them because they might be waiting for family members to get dressed,” she clarified.
In addition, she explained how, through the information presented, we could identify the level of efficiency of the hospitals and medical centers, and thus know which ones were effectively accepting patients. Another interesting element drawn from the data was the ease of access to hospitals. “Stations in the South of Lebanon, for example, have amazing response times but the transit time to hospitals is long. Whereas in Beirut, there is more congestion, so they have longer travel times but more available hospitals. This gives you an immediate view of the network in which LRC is operating,” she added.

Through the dashboard, LRC and the research team have created a stepping-stone for developing and improving the system. The information provided will guide them in discovering problematic areas that are affecting their response times, and finding potential solutions for them, whether internal, such as quality control and training, or external, such as affecting hospital policies and taking logistics measures to face the road congestion.

Sa’adah, R. (2004). The Eigh-minute ALS Response Time Standard: A Review and Discussion of its Use as a Strategic Result Goal by the District of Columbia. 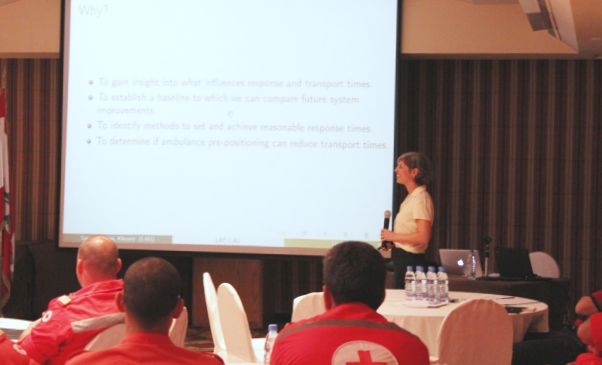