Recent study by economics faculty examines the benefits of extended parental leave in Canada for both mother and child. 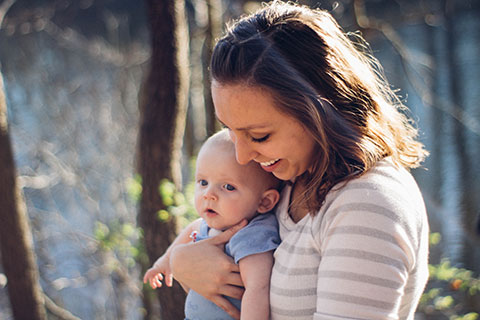 Assistant Professor of Economics Dr. Nagham Sayour’s research centers on empirical microeconomics with a special interest in labor economics, child development and experimental economics. Here, she speaks about her most recent study, The impact of maternal care on child development: Evidence from sibling spillover effects of a parental leave expansion, published in Labour Economics.

Q: Your study looks at the effects of increased timemothers spend with their infants in Canada following a reform on parental leave in that country. You found that spending more time with the mothers had positive effects on children’s emotional disorder score in the short term, and that two-year-olds who spend more time per week with their mothers have better non-cognitive skills than those in institutional daycare.

A: In the paper, I study the effects of maternal care on the cognitive, non-cognitive and health development of children aged two and three years. To this end, I use a parental leave expansion implemented in Canada at the end of 2000, and I compare two- and three-year-old children who have a sibling born after the expansion to those with a sibling born before the reform, relative to children of the same age group but with no siblings born around 2000. My hypothesis is that mothers who are benefiting from the extended parental leave will not only spend a longer time with their newborns but also with their older children. I find that mothers do actually increase the time spent with their two- and three-year-old children, with maternal care substituting non-institutional care – defined as care provided by a relative or non-relative in the child’s or the other person’s home. The increase in maternal care improves children’s emotional disorder in the short run and is especially beneficial for the non-cognitive development of two-year-old children.

Q: As an economist by training, how did you come to study this topic?

A: As economists, we are interested in examining how individuals make decisions and allocate their resources. In my research, I focus on the impact of the parents’ decision – allocation of time and income – on their children.

In addition, many economists – among other researchers – have demonstrated the influence of a child’s development in the first five years on their labor market outcomes and economic success in adulthood. That’s why I am interested in early life child development. Q: What kind of impact do you hope your study has on Lebanon, where the official maternity leave is around 70 days?

A: Even though Lebanon might have a longer maternity leave than many countries in the region and even longer than the US where there is no official maternity leave (only state/firm-implemented policies), I think it is still short.

A near consensus from research has been reached about the importance of maternal care on a child’s development in the first year, showing how it can impact the child’s life later on in aspects ranging from substance use, school and university completion to employment opportunities and wages. In addition, a longer maternity leave might encourage female labor force participation and contribute to women empowerment.

Q: Do you believe institutional care centers for young children, such as LAU’s Early Childhood Center, can have a similar effect on their developing minds as spending time with their mothers?

A: It all depends on the quality of care provided. Research has shown that good quality childcare is very important for child development, especially for disadvantaged children who actually benefit from attending childcare centers.

Q: What would you recommend for parents who do not have the benefit of long maternal leave and who want their children to flourish?

A: I recommend using good childcare and spending quality time with their children.

Q: Do you have other academic interests you’re planning on researching?

A: I am currently studying the effects of providing and subsidizing after-school care (care provided on school premises from 2:30 until 6:00 p.m.) on child development and maternal labor market outcomes (whether it encourages mothers to participate in the labor market).

Q: What research/academic advice would you give to students who have an interest in labor and development economics?

A: I highly encourage students who are interested in research in general, especially in the fields of labor and development economics, to acquire strong quantitative knowledge. The department of economics at LAU offers several econometrics courses to help students master the empirical techniques needed to conduct thorough research and formulate evidence-based policy recommendations.