LAU returns the favor and names the “School of Business” after Chair Adnan Kassar.

The Lebanese American University revealed on Tuesday April 21, 2015, the “Adnan Kassar School of Business”, in honor of the renowned businessman’s ongoing support and highly generous donation to the university; one of the highest in LAU’s history, amounting to $10 million.

The ceremony was held in the Business Building in LAU Beirut campus, in the presence of Mr. Adnan Kassar who is the Chair of Fransabank Group & the Lebanese Economic Organization, as well as the Honorary Chair of the General Union of Arab Chambers of Commerce, his brother Adel Kassar, LAU President Dr. Joseph G. Jabbra, Dean of  the “Adnan Kassar School of Business” Dr. Said Ladki and prominent political and social figures, in addition to LAU faculty and management.

After acknowledging the importance of the event to him, especially considering the naming of LAU’s School of Business, Kassar went on to declare the private sector as “the main source for growth and development” linking his involvement in chambers of commerce and industry to his interest in socio-economic development in Lebanon and the region. According to him the chambers of commerce and industry are the “organizers for private initiative and for bringing about socio-economic growth and development”.

He added that Chair Kassar’s successful career in the private sector was also complemented by his eagerness to support development projects in Lebanon and the region. Kassar’s active involvement in social development was translated by his continuous contributions to non-profit organizations and by his ongoing encouragement of quality education in Lebanon.

LAU and Fransabank represented by Kassar “joined forces to achieve these common goals”, as stated by Jabbra.

The signing ceremony was then followed by a reception during which the “Adnan Kassar School of Business” plaque was revealed by presidents Jabbra and Kassar, in the presence of media representatives who documented this significant event in LAU’s history. 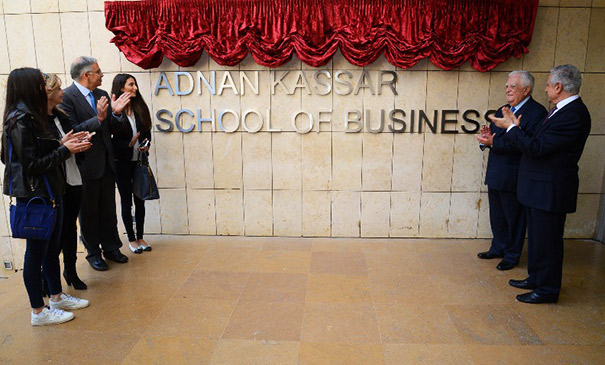